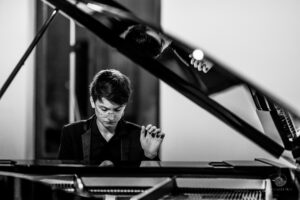 TORONTO – Yet another prize, which is added to the over fifty already won all around the world. At just 15 years old, Andrea Simone De Nicolò, an excellent pianist from Puglia, Italy, boasts an impressive curriculum to which he can now also add the “Grand Prize” obtained at the international music competition “Rocky Mountain Music Competition”, organized by Pulsar Music, based in Toronto, under the artistic direction of Master Ekaterina Paniukova.

He was the first of all pianists even in the final – the only European, among other things, to reach the final -, thus making him the first pianist ever for all age categories up to 15 years. The only Italian pianist to participate in this review, he measured himself against hundreds of talented young people from, as well as from Canada, China, Thailand, the USA, Indonesia and various other parts of the world. By virtue of the result achieved, he will be invited to play at the Winners’ Concert to be held in Toronto as soon as the Covid situation allows it.

Andrea Simone De Nicolò is 15 years old and lives in Valenzano, in the province of Bari (Puglia, Italy). He studies piano and harpsichord. He is an excellence of the Bari Conservatory, where he is enrolled in the three-year academic piano course after having achieved, in just four years of attendance, the certification of the five-year pre-academic course – with full marks, honors and honorable mention – and the completion of the preparatory course.

He also received the highest grade Concert Certificate issued by the St. Cecilia School of Australia, again with full marks, honors and special mention by the examining commission.

His piano teacher is Giuseppe Campagnola, principal piano teacher at the Bari Conservatory, while his harpsichord teacher is Margherita Porfido. He studied in masterclasses with Pierluigi Camicia and Jingxian Xie, for the piano, and with Anna Paradiso Laurin, for the harpsichord.

He has played several times in concerts, in Italy and abroad.

The media are also taking an interest in him: he appeared several times in online newspapers and in Gazzetta del Mezzogiorno, the Italian television broadcasters Telenorba and Rai Tre were interested in him (he was the guest of Grazia Rongo, during the “Mattino Norba” broadcast on Telenorba, and of Marco Liorni, during the “Italiasì” broadcast on Rai Uno) and the “Rai Gulp” editorial team dedicated an entire episode of the well-known children’s magazine #explorers community to him.

His YouTube channel (you can find it here), in just over a year, has already registered more than 830 subscribers and more than 13,000 views. And this is only the beginning…