A School Board with strange priorities 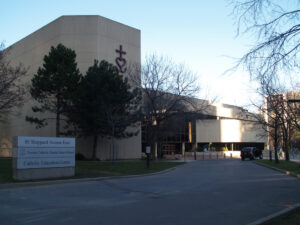 TORONTO – Last night’s emergency meeting of the Toronto Catholic District School Board (TCDSB) reminded me of a 1964 Pop Music classic, Tobacco Road. Two verses stand out: “Bring that dynamite and a crane, Blow it up, start all over again…”  Thank God (it is an expression that will soon be outlawed if some woke trustees and Senior Staff have their way) that saner heads like trustee Lubinski (in the pic below) were able to demand the meeting.

Elections Canada has asked for space so that it could establish locations for in person polling stations inside schools for the September 20 election day. The TCDSB had prohibited the use of any school in the month of June to conduct any school graduating ceremonies, for fear that the potential for contagion of the Covid19 virus might be too serious to permit.

Also, schools might not be able to meet the guidelines established by local public health authorities for public interaction in confined spaces. Moreover, they might not be able to keep the schools and children secure and safe from a potentially infected public. Some trustees thought the legal risks outweighed the benefits.

Ahh, the benefits… apparently some $150,000 for the schools deemed eligible (13 of some 187 under consideration). Elections Canada (EC) assumed NO legal responsibilities for any ensuing legal issues, but the bright minds at the TCDSB presumably thought the money was worth the gamble. Their “buddy” at the Ministry, Stephen Lecce (in the pic below) must have consented.

Indeed, his allies on the Board were expected to beat back any challenges to the decision. Trustee Lubinski thought differently – medical and public health of the children in the Board’s care come first. She managed to marshal the support of five other trustees to compel the calling of the unscheduled meeting.

Still, two trustees, Frank D’Amico and Daniel Di Giorgio, who supported the call of the meeting, voted against her unamended Motion to overturn the Staff decision to imperil their students and curry favour with EC. So did other members of their cabal, Li Preti, De Domenico and Rizzo and, unbelievably, two student trustees.

It was embarrassing to watch the level of unpreparedness by Senior Staff for the occasion. Our children’s health and education are in their hands? God (is it still proper to invoke His/Her name in a Catholic environment?) help us.

In the end Lubinski’s motion passed with the support of trustees Crawford, Tanuan, Del Grande, Martino and, surprisingly, Kennedy. Director Brown was compelled to walk back the Board’ earlier commitment by sending the letter attached below.

Tomorrow’s meeting (September 2), in anticipation of school re-opening has yet another provocative topic that threaten the credibility of both the Administration and raison d’etre of the TCDSB and the Catholic schools.

The archdiocese seems in a state of slumber, but stay tuned.

The pics of Trustee Teresa Lubinski and Minister Stephen Lecce are taken from their Twitter pages, the pic of TCDSB is from Wikipedia

On behalf of the Toronto Catholic District School Board (TCDSB), I am writing to advise you that at our Special Board meeting this evening, the TCDSB Board of Trustees approved a motion that TCDSB schools not be used as polling locations in the upcoming election. I have included the full board approved motion below for context around why this decision was made and for your reference.

“WHEREAS: This Special Board meeting was called at the request from six Trustees on Tuesday August 24, 2021 regarding the potential use of our schools for polling stations on Election Day 2021;

WHEREAS: Millions of dollars were spent to re-open the schools and protect our students
and staff;

WHEREAS: Mental health issues are on the rise due to extended on-line schooling and isolations from friends and peers;

WHEREAS: Schools have traditionally been used as polling stations in the past, however, we are in pandemic for the last eighteen (18) months, and this is not a regular school year;

WHEREAS: Elections Canada can put up big outdoor tents on their properties which they have a lot of;

WHEREAS: Commercial buildings, arenas and public municipal buildings can be used for polling stations;

WHEREAS: A request for outdoor graduations on behalf of our school communities was made in June of this year, but that was not allowed; and

WHEREAS: For this Board to now allow unidentified people to our indoor school facilities would carry more risk to our system, especially with the onset and prevalence of lethal variants.

THEREFORE BE IT RESOLVED: That the Director write a letter to Elections Canada to notify them that the Toronto Catholic District School Board has passed a resolution that it will not permit polling stations in its schools in the upcoming federal election so that the Board totally eliminates any additional risk of exposure of COVID to our students and staff.”

If you have any questions, do not hesitate to contact my office.